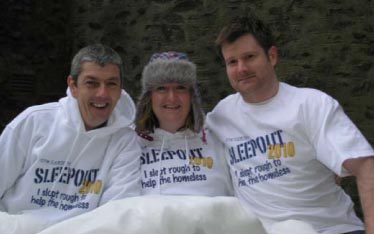 1,000+ gathered  with their sleeping bags in aid of homeless causes

The Aberdeen Cyrenians 19th annual sleepout (pictured) was a great success. More than 1,000 people gathered at the Aberdeen Exhibition and Conference Centre with their sleeping bags, to raise money and awareness for homeless causes.

A large number of the participants were school groups, with Northfield Academy raising £1,300 from the 38 pupils and staff who attended the event.

Many of the youngsters spent the night sleeping in the car park to gain an insight into what it is like to be homeless. Cailin Ritchie, 13, a pupil at Kemnay Academy, said, "Sleeping outside means it is the proper experience. It gives you more of a feel for what every night is like for homeless people - but we are not expecting to get much sleep."

The £25,000 raised is the best ever fundraising haul for the Cyrenians, Alisdair Caulfield, said the charity was "over the moon."

"This year we tried to make the sleepout the biggest and best yet, and it certainly looks like we've done that. We really want to raise money but also raise awareness about the plight of Aberdeen's homeless and the sleepout is an excellent way to do that." Around £350,000 has been raised from the event since it began.